Art and Poetry – Rediscovering the Power of Fusion 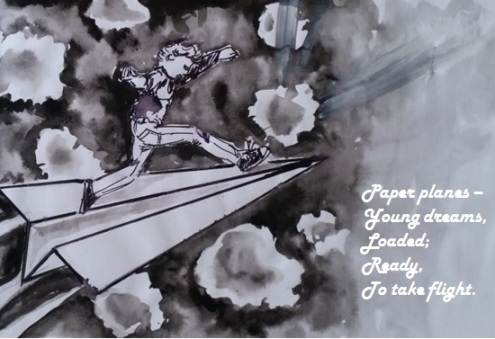 Visual poetry is poetry with the characteristics of intermedia in which visual elements and non-representational language play a dominant role. Abstract patterns and elements of typography are widely used to create visual poetry. A variant is also picture poems, in which letters and words of the poem are visually arranged to form a concrete picture.

Here is a Wikipedia link to Visual Poetry: https://en.wikipedia.org/wiki/Visual_poetry

While Visual Poetry of this kind is relatively modern, dating around the 1950s, varying forms of visual poetry date back to ancient cultures, such as Persia and Greece, in the form of Altar poetry. They didn’t appear again in the Western world until the 16th century, when English, French, and German Renaissance poets started writing and printing their poems to specific shapes and patterns. Some examples can be found at: http://www.webexhibits.org/poetry/explore_21_visual_examples.html

This blog is the creation of writer/poet Preeta Chandran and painter/artist Pankaj Kumar Saxena, and is devoted to the rich and powerful form of expression that arises from the fusion of art and poetry.